Des res on the water

Bearwater may sound a bizarre name to those who have not visited and seen that this private estate in Hungerford has not just a river running through it, but also a lake. Set in five acres of grounds on the banks of the River Dun the 35 properties arranged around two garden squares are a haven for nature lovers. The lakeside accommodation has just been added to with a fine new des res floating duck house, built by owners William Fisher and Ron Rowland. Some moorhens and their chicks quickly took up residence.

Estate manager Anne Maddison, pictured, enjoys the outdoors life and with so much water around has trained in coppicing and faggot making, traditional methods used to strengthen and repair riverbanks. She also has a licence to trap the American crayfish, which damage the banks and kill native species. Finding a bucket of crayfish on the doorstep is a regular event for gourmet owners at Bearwater. Not surprisingly Anne is a popular figure! Before coming to Bearwater she spent 10 years in Menorca where she ran her own business as a complementary therapist and launched a charity, called Rest and Recover Menorca, to provide holidays for injured British soldiers and their partners.

Bearwater has many enterprising owners drawn from different walks of life. There is a historian who is still busy writing books, and a photographer who produces an annual calendar, which includes shots of Bearwater. A couple who live in Alabama in the USA have a cottage
on the estate that they use as a holiday home, enjoying the fishing; and another couple from Nairobi also use Bearwater as their UK base.

The gardens were an attraction for recent arrivals former GP, Dr David Cave and his wife Pat, who moved from East Kent to be nearer to their six children and 16 grandchildren. “The gardens were looking glorious, exactly like a National Trust property, and the people we met looking around seemed happy to see us.”

In a triumph for the owners and gardener Andrew King, they won second place, which they topped with first place this year! Andrew took over the post from his father and together they have worked at Bearwater for its entire 30-year history.

Another talented owner is Major Mervyn Colenso-Jones, who has taken up painting as a new hobby and exhibits his work. During his military career the major and his wife Anne were posted to Jamaica, Germany, Malaya, Cyprus and America. Upon retirement he became a member of Her Majesty’s Bodyguard of the Honourable Corps of Gentlemen at Arms, a group set up by Henry VIII in 1509 and also known as the Nearest Guard.

“Our estate manager Anne is very helpful. She doesn’t mollycoddle us but she helps if something needs doing. She has experience in the ways of the world! The ducks on the pond have an AGM every morning and come into the conservatory. This is a very nice place to live.” 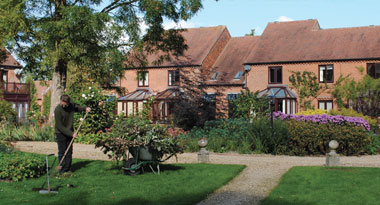 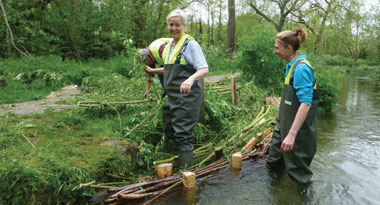