After 10 years, even in the best gardens it is time to review the state of the shrubs and to rationalise what is there. Sometimes the shrubs have become over-mature and larger than expected and the original concept for the bed has been lost due to subsequent infi ll plants. When this happens the best option is to remove all unwanted plants and start again.

This was the situation Charles Gilchrist, landscape manager, faced at Hildesley Court in Berkshire; a bank border that was proving diffi cult to maintain, with shrubs looming over the benches giving a claustrophobic feeling to the spot. Posts in the wooden retaining walls were also in need of replacement. The decision was taken to grub out the bed and replace the woodwork, at the same time creating a series of terraced beds. This spring a small excavator removed the large shrubs and weeds as well as replenishing the soil for replanting. Beds around the pond and trough were also restored.

The result is a more open and inviting seating area with the views to the fountain visible once again. We have given the new shrubs plenty of room to grow so they will be unencumbered by their neighbours in maturity. It also means that weeding the beds will be easier over the next couple of years while the new plants grow into their positions. 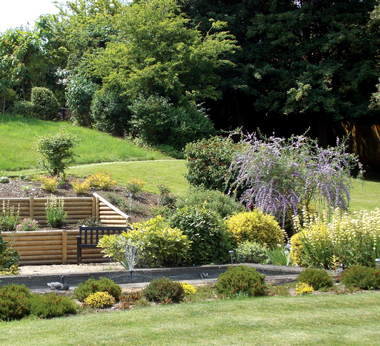