The Marlborough Brandt Group, MBG, was set up in 1981 by a group of people living in Marlborough, following the publication of the Brandt Report that highlighted the chasm in living standards that exists between wealthy countries and the developing world. In 1982 a partnership was formed between Marlborough and Gunjur, a Muslim community in The Gambia, West Africa, founded on mutual learning through reciprocal visits. So far some 1,500 people from The Gambia and Wiltshire have taken part in the exchange programme staying with local families.

Commander Trevor Kearley, who moved to Cognatum’s Wye House estate in 2012 as a convenient springboard for his excursions abroad, is now a trustee of MBG, which resulted in this reflective account of his recent visit to Gunjur.

‘I turned 80 in August and am now travelling as though there is no tomorrow. I have bought a flat in Cape Town to stay in three or four times a year. I have the “love of Africa” bug.

‘I had travelled in a dozen or so countries in Africa, so my first visit to Gunjur as a new MBG Trustee was not entirely novel. ‘The searing sun, bustling dusty towns and shanty villages and the brightly dressed women were familiar. I was to stay with an ordinary African family in their compound.

‘I am ashamed to say that in the first 48 hours I found myself thinking: “I’m not a celebrity but please get me out of here” ‘No running water, flushing loo, electric light, drawers or hanging space. A thin patchwork foam mattress on a vast bed that collapsed under me at 1.15 am on the second night. The not-so-hot food. A cockerel outside my net window – his raucous and unpredictable squawk from 3.15am onwards piercing the other sounds of an African night.

‘A maxim that I try to heed is: “If you don’t like something, change it. If you can’t change it, change the way you think about it.” So on day three of my visit I did just that. I reasoned, we are all human beings on this planet and as an accident of birth they are Africans and I am European reared in different circumstances though no fault or merit. Poverty and wealth are only perceptions.

‘The genuine sincerity of our greetings and meetings with the Gunjur people at all levels warmed my heart, not least their obvious love for immediately recognized “Doctor Nick”, the founder MBG Director, due to retire after 33 years and 61 visits. Countless traditional hugs for him, an outstretched hand and a smiling “You are welcome!” for me, the newcomer. The many children of my compound’s family running to greet me on returning home at day’s end.

‘I learned that the African name they had given me is “Father Ebrahim” and when I left I had the honour of being presented with a specially made caftan in purple cotton. It was a truly sad parting, mollified by reassuring “my” family that I would return one day.

‘You can read elsewhere about the achievements of the Marlborough/Gunjur link. I have written here only about the warmth of an African welcome and kindness because these are the abiding images from my ten days in Gunjur. Smiling black faces with dazzling white teeth, sparkling eyes and an embrace that is physically and emotionally strong. True family and community love and respect for old age. Those are the memories that I shall treasure. How right Willy Brandt was to make his profound report.’ 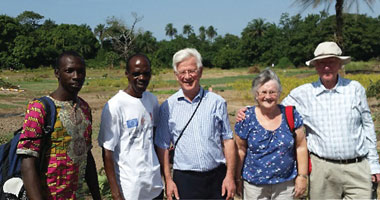