Cognatum's single Blue Cedar Estate in Herefordshire can be found in Colwall just a few miles from Malvern and the dramatic beauty of the famous hills. About four miles to the southwest of Malvern, Colwall is thought to be the longest village in England. It has several shops, a library, a doctors’ surgery and ‘Aunt Alice’ otherwise known as the clock tower built in Colwall stone in the 19th century. There are several pubs and restaurants nearby and the historic parish church of St James. Herefordshire is mostly a rural marcher county with a rolling landscape gently rising to the west into the foothills of the Welsh mountains. There are parts with rich river valleys such as the Wye Valley that have views of unparalled beauty with native cattle as a backdrop. The area is also well-known for its many black-and-white villages and the Black Mountains are the highest point in England south of Yorkshire. 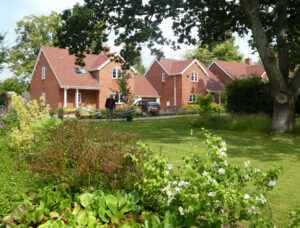