Stuart Court in Minchinhampton had some very distinguished guests at their garden party at the start of June. HRH The Princess Royal, accompanied by her husband, Vice Admiral Sir Timothy Laurence, attended the event and performed the official opening of the seven new properties on the estate.

Preparations had been set in train many months earlier, following Estate Manager Milton Hussey’s suggestion to invite the royal couple. The princess’ home, Gatcombe Park, is less than two miles from Minchinhampton, and she and her family are often seen around the village. 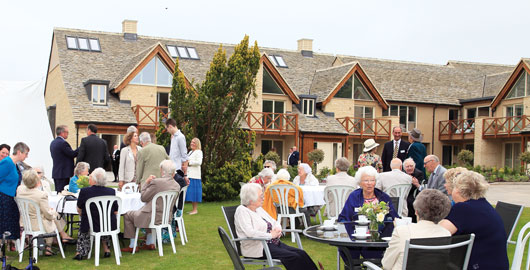 The day dawned with gentle sun and intermittent cloud, and temperatures had reached a pleasant 18 degrees as tables and chairs were set out on the lawn, adorned with freshly-picked flowers from the gardens of Stuart Court. The deputy estate manager, David Collicott, a retired police officer, was the natural choice to assist with security for the event, welcoming guests at the gate, checking their invitations and handing out name badges. 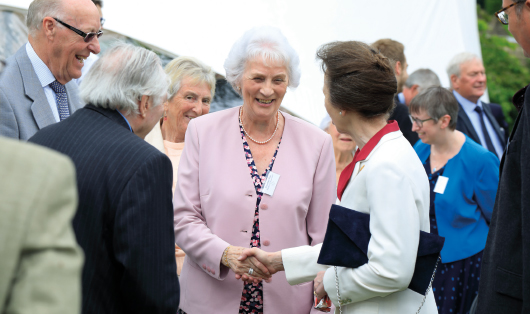 All the residents of Stuart Court, along with Cognatum staff and guests, were in place to see Princess Anne drive her Land Rover into the grounds shortly after midday. There she was met by Her Majesty’s Vice Lord-Lieutenant for Gloucestershire, Robert Bernays, who in turn presented the High Sherriff of Gloucestershire, Charles Martell; local councilors, Milton and Sarah Hussey; and Cognatum chairman, Alex Matthews. As the princess walked towards the receiving line, the sun broke through the clouds for a few moments, bathing the estate in soft sunshine and provoking a ripple of excitement. Alex and Milton then escorted Princess Anne to the show house where she was introduced to David Boden, CEO of the development company, Pacalis. Sarah Hussey accompanied Sir Timothy.

Whilst the guided tour was taking place, everyone meeting the royal party was ushered to their correct positions. As Princess Anne emerged from the show house the sun shone again, and she was introduced to the assembled guests. She and Sir Timothy then circulated amongst all the other garden party guests, and enjoyed several minutes chatting with Noel Shuttleworth, Life President of Cognatum Estates. 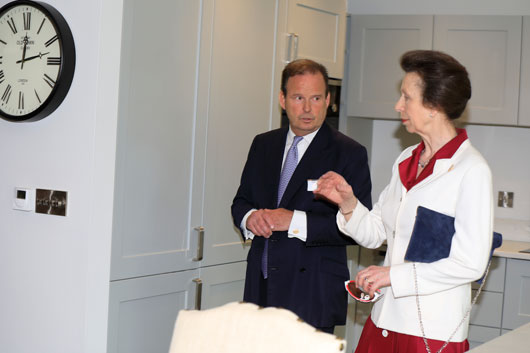 Enjoyment was high and time flew by. Alex Matthews gave a short speech, thanking The Princess Royal for her visit and praising the new development, the beauty of Stuart Court and the vision of Noel Shuttleworth in setting up the English Courtyard Association. Princess Anne then unveiled a beautiful hand-carved plaque and was presented with a posy of flowers by Mrs Gill Ellis. By now it was time for her to depart for her next engagement.

Drinks and delicious canapés were served and the garden party continued into the middle of the afternoon. Everyone agreed that it had been a lovely occasion.