Monmouthshire is an historic border county mostly unspoilt and full of rivers - the Wye Valley is one of the most beautiful in Britain. For many years the area was hotly contested and is now part of Wales and the many castles remain. Tintern Abbey is most famous having been imortalised by Turner and for many years a place of pilgrimage in its magical setting. The equally impressive Llanthony Priory in the southern part of the Black Mountains has a magnificent position. Towns such as Abergavenny, Monmouth with its castle, Raglan with its ruins of its 15th century castle and Chepstow also with its castle in its powerful setting overlooking the Wye are fascinating places to visit. 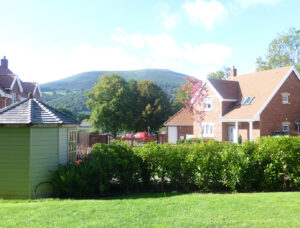 Knoll Gardens is on the edge of historic Abergavenny in the southern part of the Black Mountains and on the River Usk which has some of the best salmon fishing in southern Britain.